FUN: Standing up to be counted

It’s not an especially topical subject at the moment, what with the Edinburgh Festival being long gone for another year, but over the past year or so my wife and I have started going to see some stand-up comedy. In particular, we have quite recently seen a couple of stand-up comediennes. (Or, as with the words ‘actor’ and ‘actress’, should that now read ‘female comedians’ in order to be politically correct? – although I do find swapping a word that makes it plain what you’re talking about for one that doesn’t is a dubious linguistic advance.)

Latterly we saw Katherine Ryan at London’s Garrick Theatre. She’s a Canadian comedian/comedienne, writer, actor/actress who lives in London. You may have seen her on TV in such shows as Have I Got News For You, Mock the Week and A League of Their Own. Her stage show, which run ends this coming Saturday, is called Glitter Room, in honour of the name bestowed on her daughter’s bedroom. Said daughter is called Violet and is nine years old. She (apparently) talks very posh and, despite her mother’s nationality, considers herself English. If she wants anything difficult to be organised, she (allegedly) says: “Sure you can fix it, Mommy. You’re on television.” Fame as the answer to everything. 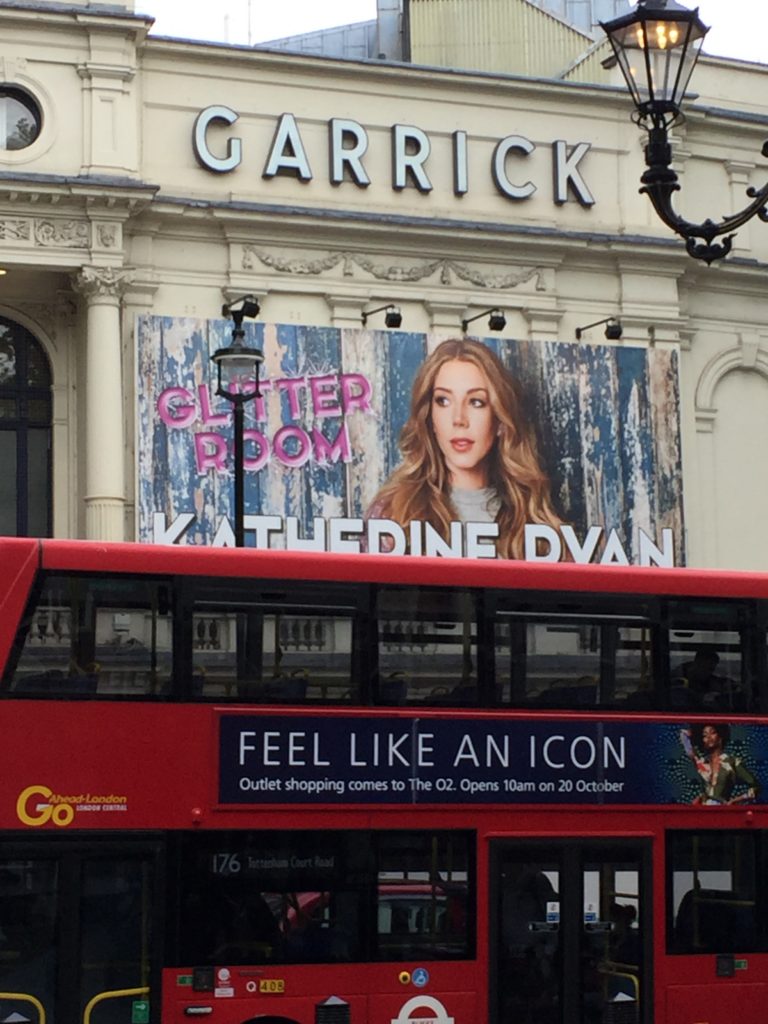 Her show lasted an hour and 20 minutes, much of it, although by no means all, featuring a recurring riff about life as a single mother. She and her daughter have code whereby when, on request, Violet brings her “day wine”, which is white. “Night wine” is red. “Sometimes,” said Ryan, “she can get very confused looking out at the sky if it’s around 7.30.” Violet’s retaliation can be damning. “Mummy hides wine in the walls,” she’ll tell her mother’s friends. “Stop that, Violet!” Ryan will respond. “It’s a wine rack and you know it is.”

The opposite sex occasionally get a bit of stick – “men are like dolphins, best enjoyed on holiday” and “this guy calls to me, ‘I’m running a marathon for cancer awareness’ so I said ‘Yes, I’ve heard of it, you can sit down now” – but they are not alone. “I spent hours baking for a bring-and-buy charity sale and when I got there and saw the stall I said to Jane [the organiser] ‘What, they’re going for 10 pence each? Are you selling cakes for Bangladeshi children or to Bangladeshi children’?” You won’t be shocked to know she’s pretty harsh about Donald Trump. But fair.

We went to see Bridget Christie at the Leicester Square Theatre in late 2016 with a show based on the perils of Brexit – Because You Demanded It – and earlier this year at a theatre in Soho where she did a kind of preview programme for her current show, What Now? She is a little more overtly political than Ryan but the one-liners come at a rattling good pace and the monologues are both amusing and quite profound. Anyhow, I quite fancy a sex change. Frank Skinner is performing in North London next month so, depending on ticket availability, I think he’s up next.

40 thoughts on “FUN: Standing up to be counted”