I can’t say I have a fund of specific memories, as opposed to the general pleasure of doing things with one’s kids, but I do remember the first time my younger son, Sam, went down an adult-sized flume (as opposed to a kiddies’ version) on his own at Aquasplash near Antibes in France. He was probably about seven at the time and nervous about doing it, although determined to do so not least because Ben, his elder brother, adored the whole process. I went down the neighbouring one at the same time as Sam began his descent. I got to the bottom way quicker than he did (mostly because I weighed a lot more) and the expression on his face as he slid into view was the epitome of childlike ecstasy. He’d hardly landed in the pond than he was racing off to do it again. 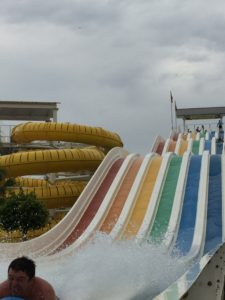 The two images with this story were taken at the Aquashow water park just outside Quarteira on the Portuguese Algarve. The facility even has its own accommodation, at the Aquashow Park Hotel, right on site. As you can see, the weather was a little mixed on this particular day, which meant I settled down with a book and a coffee while the boys went at it. (I find that nowadays I need guaranteed sun to help assuage the chill of the water.) And from their perspective, the comparatively ordinary weather provided a bonus. It meant the park was not as busy as expected, which meant the Q-word didn’t come into play.

There is an invariable trade-off with water parks. More sun means more people; less sun means less queueing. On this day, it meant almost none, and when there are no queues, you can get on a lot of rides in a couple of hours. This meant, if you so chose, you could readily and regularly take on the Big Dipper-like Montanha Russa (it’s quite terrifying; I keep thinking I’m going to bash my head on a tunnel roof) or plunge 100 feet down the Free Fall slide (no thank you very much) pretty much as frequently as you wish.

In common with most things in life, there are rules and regulations governing water parks. On some slides you aren’t allowed to go down on your front; others require the use of a rubber ring. And then there’s the weight-limit element. One of the more extravagant flumes at Antibes had an age limit (you had to be at least 16) and a weight/height limit, because of the curvature of the enclosed tube. Ben and Sam figured that one of their cousins would have failed both ways – by the time he was 16, he was too tall to use it.