Between 1980 and 1999, there were 11 European winners of the Masters Tournament. Since then, none. Until last evening that is, when not only did 28-year-old Danny Willett from Sheffield win his first major championship, he did so at the head of a leaderboard that featured seven Europeans in the top-10, six of them Brits, three of them from Yorkshire. When it came to the crucible, Lee Westwood and Matt Fitzpatrick were thereabouts as well.

In simple terms, Willett won with a magnificent closing round of 67, five under par, with five birdies and no bogeys. As with pretty much all good rounds, it could have been better – for example, he missed birdie putts from ten feet and five feet on the first two holes, and it’s massively to his credit that he did not let those minor setbacks become major distractions on his way to winning this major. His margin of victory was three strokes, from Westwood and Jordan Spieth.

Oh yes, Spieth. The final day began with the young American trying to become the fourth man to successfully defend the title and heading into the final round in front. But it was only a one-stroke lead because he’d played the last two holes of his third round in three over par. His closest pursuer was Smylie Kaufman, for whom the only thing more improbable than his name was surely the fact that his third-round 69 was the only sub-70 score since Thursday, which indicated how strong the gusting breezes of the first three days had been in the unusual Augusta weather – sunny but cold, as if the place had been relocated to Georgia in the Caucasus instead of Georgia close to the Carolinas.

Spieth’s inadvertent altruism had let a load more players back into the mix, Willett among them. He was on level par, three off the pace after rounds of 70-74-72. But through the front nine on Sunday, when the climate gradually began to become more like what we expect at Augusta in April, none of this seemed to matter. Spieth reached the turn in 32 to move to seven under par and a five-shot lead. He looked home and hosed. Then a poor second shot to 10 and a pushed drive at 11 led to bogeys, posing question marks. On the 12th, one of the most beautiful and fiendish par-threes in the world, another pushed tee shot put his ball in the water. His third shot, from the drop zone, was duffed so badly it barely reached the hazard. He walked off the green with a seven, the first quadruple-bogey of his career (what a time for that!), his scorecard in tatters, his lead vanished and his brain in turmoil. Up ahead, Willett made his final birdie of the day at the 16th and neither Spieth nor anyone else could do anything about it. 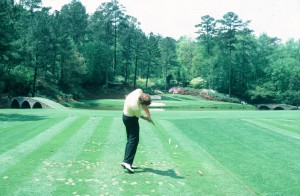 After the first day, the main story hadn’t been about the overnight leader – Spieth, as usual – but about a man who’s never won the Masters despite going close several times. That was Ernie Els, the 46-year-old South African who has won four majors despite remaining empty-handed at Augusta. It is said the Masters doesn’t begin until the second nine on Sunday. For Els it was pretty much over before he reached the second tee on Thursday. He took nine at the first, six-putting from what started out as two feet. Ernie has been intermittently yippy with the putter lately but this was something else. In fact, it was so bad that it was initially reported that he’d taken a ten; difficult to keep count, I guess. (One year Seve Ballesteros was asked to explain how he’d four-putted the 16th, to which he succinctly replied: “I miss, I miss, I miss, I make.” A similar response would have taken Els too long.)

So Ernie was quickly destined for the weekend off, unlike another man with notorious putting problems in his past. Bernhard Langer, winner here in 1985 and 1993, is now aged 58. He was the world No. 1 when the official rankings were inaugurated in 1985 and he played the third round this year with the present No. 1, Jason Day. And Bernhard outscored him, 70 to 71. Remarkably, he was one under par after 54 holes and in the second-last group on Sunday.

Ultimately he couldn’t come close to doing what Tom Watson, aged 59, had done at the 2009 Open and almost win, but on a course as tough as Augusta, it was an extraordinary effort. As, of course, was the performance of Danny Boy, tournament winner in Dubai in early February, first-time father in late March, and now the first British winner (the fourth all told) at Augusta since Nick Faldo 20 years ago. He’s heading into the world’s top-10; he is indeed a man of steel.