GOLF: Gonzo world and getting ready for the Masters at Augusta

It’s Masters week. For many golf fans, this represents the beginning of the season. The sun should be shining and the Augusta National course should look glorious. It’s an iconic week in American sports. Until recently, I hadn’t realised just how much.

In 1971, Hunter S. Thompson publish his seminal work, Fear and Loathing in Las Vegas, subtitled ‘A Savage Journey to the Heart of the American Dream’. (The cover is on the home page.) It was accompanied by a series of appropriately loathsome illustrations by Ralph Steadman. According to the book Sticky Fingers: The Life and Times of Jann Wenner and Rolling Stone magazine, written by Joe Hagen and published last autumn, F&L was the consequence of a publication Thompson and Steadman had planned for 1970 that would “shit on everything” – i.e. America’s most precious institutions. This method of journalism was named “gonzo”, a term coined by a friend of Thompson’s. The latter used it because he liked how it sounded. Specifically, according to Wenner/Hagen, the targets “would take on Mardi Gras, the Masters golf tournament, the Super Bowl, and New Year’s Eve in Times Square and package the stories under the theme of the American Dream”. The intended magazine never came to pass but the F&L book did. And, of course, the Masters survives and thrives. 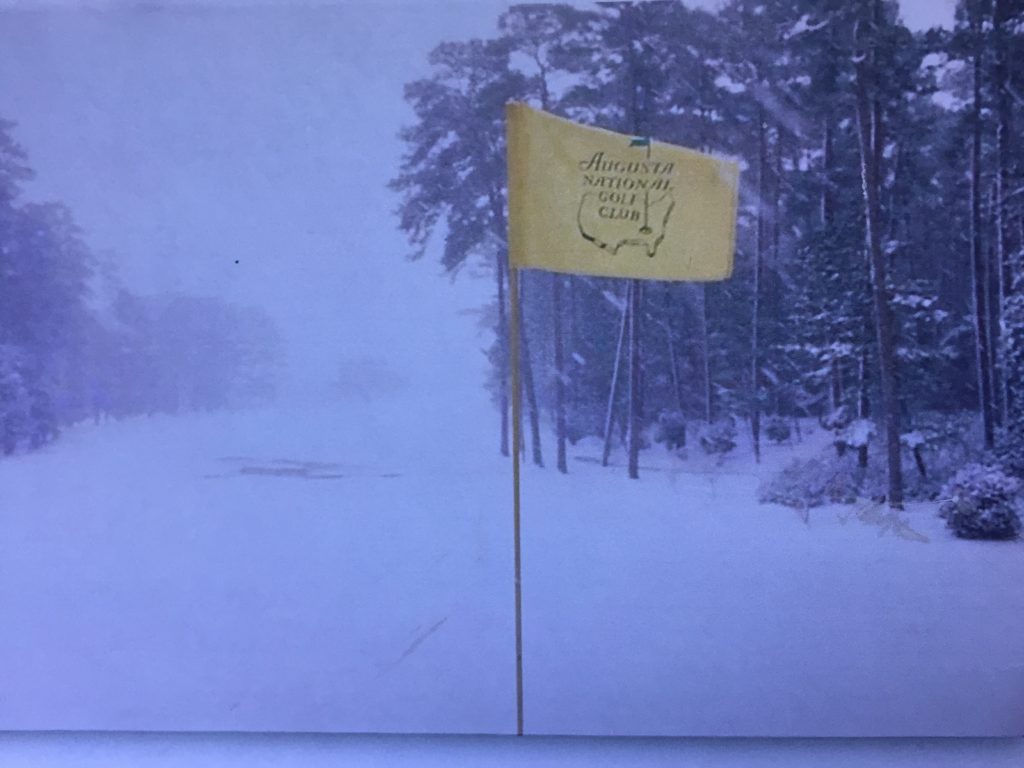 White stuff is not common at Augusta National but it played a very big part in Hunter S. Thompson’s life

While I know the Masters has a huge reputation now, and that it represents one of America’s most celebrated and exclusive public social gatherings, that was not the case in 1970. Corporate hospitality was merely a gleam in the mind of some wannabe millionaire. There was no enormous black market in season tickets. The tournament was won by Billy Casper after an 18-hole playoff with Gene Littler. Casper received a cheque for $25,000. (Last year’s champion, Sergio Garcia, got $1.98 million.) Shortly afterwards he would have been led to the press centre, which in those days was a hut, as opposed to the sumptuous palace of today. Yet even in that much humbler guise, Thompson apparently wanted to hunt the Masters down.

Reading F&L recently, it seems somewhat dated while making most strongly, and probably unintentionally, the case for avoiding hallucinogens of any sort. Altogether. The opening sentence – “We were somewhere around Barstow on the edge of the desert when the drugs began to take hold” – is often cited as one of the most compelling in American literature; it grabs your attention and it’s consistent with the tone of the whole novel. Thompson later further established his name as a senior writer for Rolling Stone, but, all told, it was a miracle his lifestyle permitted his lifetime to last so comparatively long. Eventually, raddled by pain and unable to function without a huge cocktail of drugs, and in fact not able to function with them either, Thompson shot himself in February 2005, less than two months before Tiger Woods would win the last of his four green jackets. Maybe this time next week he, another man who has had (albeit prescription) drugs-related issues within the past year, will return to winning ways with his first major championship in just under 10 years? If he does, just don’t describe the colour of his jacket as gonzo green.

50 thoughts on “GOLF: Gonzo world and getting ready for the Masters at Augusta”