You may have heard that Tiger Woods won a golf tournament yesterday. A sentence that used to be almost as routine as remarking that the sun had come up can now be said for the first time in more than five years. Less than a year ago Woods was ranked 1,199th in the world. Today he’s up to 13th. And it wasn’t any old tournament – it was the PGA Tour’s season finale, the Tour Championship. Playing the final round with Rory McIlroy, Tiger saw him off comfortably enough and eventually prevailed by two shots from Billy Horschel. It was the 80th PGA Tour title of his career; only two more needed to catch Sam Snead. But that will have to wait a while, for this week he will be in Europe, which is where I had intended to come in with this blog.

The second Ryder Cup match to be played on continental Europe tees off at Le Golf National Golf Club, near Paris, on Friday. The first such occasion occurred in 1977, when the European team was captained by the late and great Seve Ballesteros at Valderrama, in his home country of Spain, and the Europeans duly came up with the goods and the result for their man and their fans. Making his debut as a player in that match was Thomas Bjorn, the Dane who will lead out the European team in France. The United States has not won an away match since 1993, and only two in total since the turn of the century, but one of those was in Minnesota two years ago so Europe is in the latterly unaccustomed position of trying to regain rather than retain the trophy. The pressure is on.

The photo on the home page shows the basilica of Sacré-Coeur in Montmartre, and competitors in the Ryder Cup certainly have to show a lot of heart. Predicting the winning team is never easy, or at least it hasn’t been since 1985. Not only is recent history on its side, the European team has the best average world ranking it has ever had. On the other hand, the Americans have nine major champions versus Europe’s five and Woods has six more majors to his name (14) than the Europeans combined, for whom McIlroy has four of the eight majors they have won. 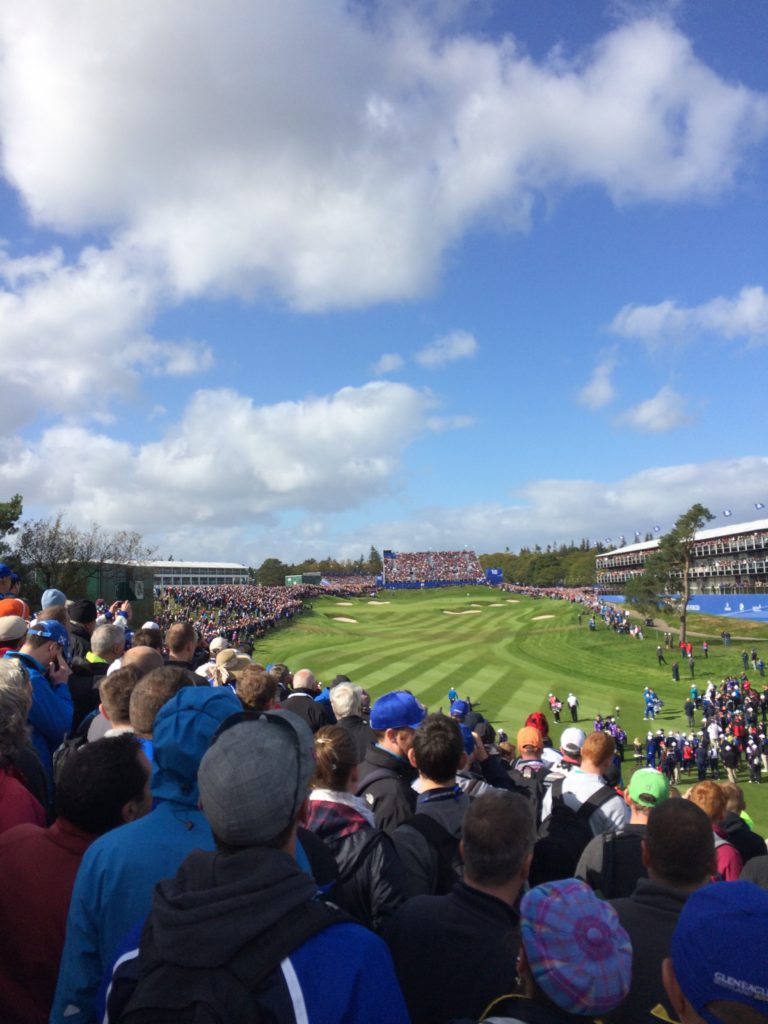 What does play to Europe’s advantage, or it least one would expect it to, is the golf course. It has hosted the French Open since 2002. Alex Noren won there this year. Tommy Fleetwood did last season. Francesco Molinari has been runner-up three times. Heck, even the lately lacklustre Sergio Garcia had his best performance of the season there, a tie for eighth (at least it was his best until he tied for seventh in Portugal yesterday), this past summer. But it is not only familiarity which should breed content for the hosts. Le Golf National is a highly strategic course. There likely will not be more than a handful of holes on which anyone will be hitting driver off the tee, which hugely diminishes the aspect of the game in which the Americans have a distinct advantage – length. Brooks Koepka and Dustin Johnson are not simply going to be able to haul out the big stick and fire away.

Of course, Europe also has a 13th man on its side. Or does it? “I just pray the French crowd can produce the same atmosphere [as the British],” Colin Montgomerie, the 2010 captain in Wales, told the Sunday Telegraph yesterday. “But I am slightly anxious in this regard, because France is not really a golf country.” A French pro, Mike Lorenzo-Vera, told the New York Times earlier this year: “Golf is not a good thing here. It’s for rich people and spoiled kids. Private courses for only rich families or rich people – that’s it.”

On the other hand, I am indebted to the Allan Jones book, Can’t Stand Up For Falling Down, for this. On a shambles of a music press beano to Mont de Marsan in the South of France in August 1977, the author recounts a remark made by Lee Brilleaux, singer with the band Dr Feelgood. “I can’t imagine what God was playing at when he created France,” he declared at an alcoholic breakfast in the town square. “They should turn it into a golf course and have done with it.” Very prescient. Who’d have ever imagined then that within less than half a century the country would be staging the Ryder Cup? A bientôt! A vendredi!

58 thoughts on “GOLF: Paris prepares for the Ryder Cup”