There will be at least a score of golfers at Augusta National this week who entertain legitimate thoughts of winning the Masters Tournament. To keep it simpler, I am going to consider just two of them – Rory McIlroy and Tiger Woods. The Northern Irishman, who is shown on the home page after his win at the Players Championship last month, turns 30 next month. He is seeking to become the sixth man (following in the spikes of Gene Sarazen, Ben Hogan, Gary Player, Jack Nicklaus and Woods) to complete the professional Grand Slam – the Masters, USPGA Championship, US Open and the Open Championship.

He had a four-shot lead heading into Masters Sunday in 2011 but imploded with an 80. At that point in his career he had won no majors. He’s now won four. Since winning the Open at Hoylake in 2014, the Masters has become the Holy Grail he’s seeking. In his four attempts since he went into the tournament looking to achieve the Slam he has finished in the top-10 every time. He’s also finished six shots off the pace every time, including after a two-over-par 74 on Sunday last time out. But he goes there this time having been in the top-10 in all seven starts he’s had this season. He said recently: “I think sometimes I’m too much a fan of the game because I know exactly who has won the Grand Slam and I know exactly the people I would be putting myself alongside. [To win] would be a massive achievement but I can’t think about it that way.” Good luck with that one, Rory. 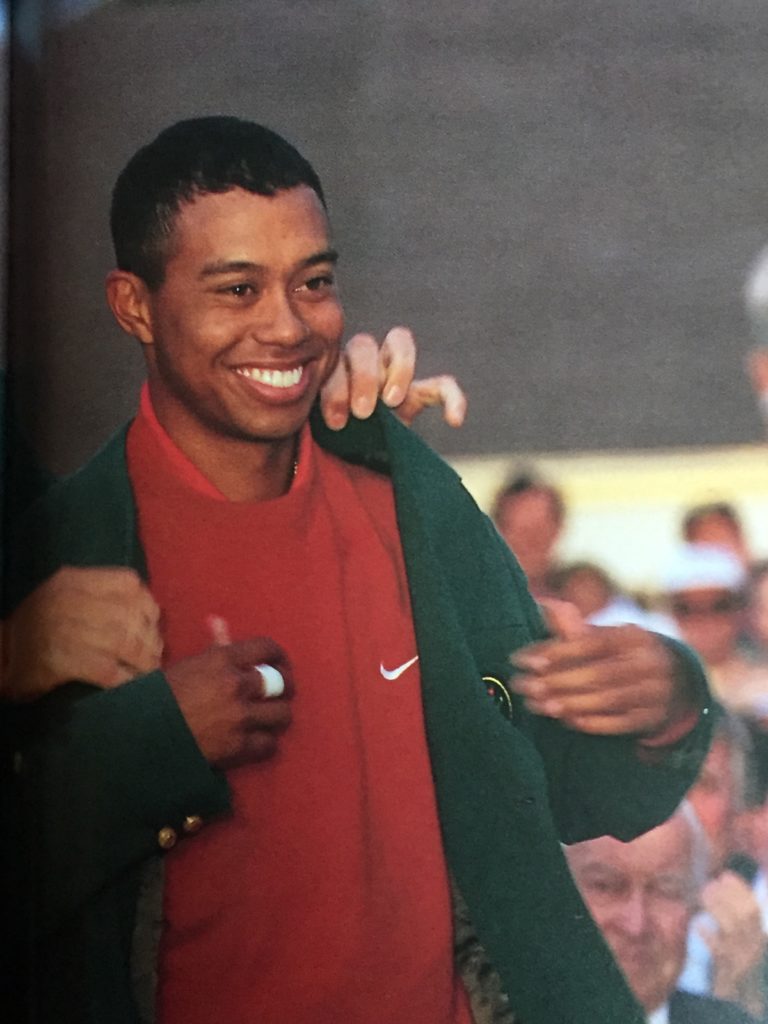 Woods after winning the 1997 Masters at age 21, being helped into the green jacket by Nick Faldo’s hands

Woods recently confessed that he had been thinking about this week since last autumn. He has won the tournament four times and has had 13 top-10 finishes. Aged 43, if he is to catch Nicklaus’s record of 18 major championships he surely needs to get a move on. Aged 38, Nicklaus had won 14 majors, the total Woods is on now. He then won each of the four once more by the time he was 46. Tiger to win at Augusta in 2022? Well, stranger things have happened but even Phil Mickelson might not bet on that. As Padraig Harrington opined in the Sunday Telegraph yesterday: “Back in the day the most famous statement about Tiger Woods was that he could win with his B game. Now he can only win with his A game.”

Woods has been re-energised since his spinal-fusion surgery. Last year, he led the Open going into the back nine and he finished runner-up in the USPGA Championship. “This year, to be able to ramp up a schedule and be able to know what I can and can’t do going into the event, is a lot more comforting than it has been in previous years,” he told Global Golf Post. It’s 22 years since he won his first major by demolishing the field at the Masters, winning by 12 shots. He’d be just as thrilled with a one-shot margin this time around.

By way of a reminder, Woods beat McIlroy in their head-to-head encounter at the WGC/Dell Technologies Match Play tournament last month. What wouldn’t we give to find them in the last match out together on Sunday? McIlroy was in that position last year but it was his playing partner, Patrick Reed, who left the premises as the champion. And having concentrated on Rory and Tiger, it should be mentioned that seven of the past eight victors at Augusta, Reed included, have been first-time major winners. Tommy Fleetwood or Matt Kuchar, anyone?