GOLF: Something old, some things new

I was rooting around among my old golf clubs the other day – getting some of them out for the photograph you see here, in fact – when one thought in particular struck me. Among my old drivers is a Callaway Great Big Bertha. I can’t recall when I bought it but I checked and found that the original Big Bertha driver was launched in 1991. Looking at mine now, it is hard to remember that at the time it seemed to have an enormous head. It is in fact 190 cc. Pretty much all drivers today have a 460-cc head, the maximum size permitted by the R&A and the USGA as they strive to do all they can to restrict the distances professional golfers can hit the ball – that is without actually doing anything about the ball.

There is something quite lovely about handling golf clubs. All that technology invested into a game; some of the materials used in the manufacture of modern-day clubs are literally the results of rocket science. I recall a conversation I had with the late Ely Callaway, founder of his eponymous business, in 1998 when he remarked how tough it was to be the market-leader (as his company then was in terms of golf clubs) in such a competitive industry. “Everybody’s products are good these days,” he said with refreshing candour. “Nobody makes a bad club.” 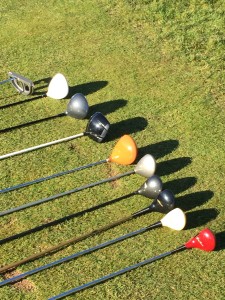 Driving ambition: it would be nice to be able to hit one of them straight…

The fine art of clubmaking was born out of the introduction of the ‘feathery’ golf ball – made from a leather casing soaked in alum and crammed with goose feathers – around 300 years ago. Previously the Scots had been belting a wooden ball around the place, which was obviously a rather more resilient object to be striking. The new, softer, missile led to the creation of exquisite wooden clubs fashioned from such as apple, ash, pear and thorn trees. Iron clubs would have caused great damage to the feathery so they were principally used only for extricating the golfer from terrible places, such as a railway line.

The introduction of the gutta percha ball and the consequent demise of the feathery around 1850 remedied that problem and clubmaking has continued to evolve. The start of the 20th century saw the appearance of the Haskell ball, the forerunner of the one we play today, and clubheads on wooden clubs became more commonly made from persimmon. Hickory replaced ash as the shaft of choice, which latterly became steel in the 1920s and ’30s and frequently graphite over the past 20-30 years.

These days steel shafts are comparatively rare in wooden clubs, but then of course wooden clubs are no longer made of wood. Do you remember John Daly winning the 1991 USPGA Championship employing a distinctive cream-headed Cobra driver made from kevlar, the stuff they use in bullet-proof vests? One of those is in this photo, too – second from the right, next to the Toney Penna persimmon driver. I tried hitting that the other day and could barely get it airborne. Mind you, that can also happen with my TaylorMade R11 (next to the ridiculous Ping putter). That’s the trouble, of course. However old or new the clubs, the quality of the shot does rather depend on the perpetrator of the swing.

58 thoughts on “GOLF: Something old, some things new”