GOLF: The Olympic tournaments golden for Rose and Park

In The Times of July 1, 2014, its journalists speculated whether the “barren moonscape” that was the site of the nascent golf course for the Olympic Games in Rio de Janeiro really was “where Tiger Woods and Rory McIlroy will tee up to battle for gold in a little more than two years time”. Actually, neither of them did. One doesn’t play any more and the other didn’t want to play this time.

Tiger was the raison d’être for golf being in the Olympics; Rory rather became the enfant terrible for deciding to give the Games a miss even though Jason Day, Dustin Johnson, Jordan Spieth, Adam Scott and Branden Grace also did likewise. That’s six of the world’s top-10 opting to be elsewhere, whether for fears of possibly contracting the zika virus (from mosquitos) or other reasons. This was golf’s first appearance in the Olympics for 112 years and at some point next year the International Olympic Committee (IOC) will decide whether golf gets to stay in beyond Tokyo in 2020.

Despite the stay-aways from Rio, I think it will probably keep its place. The vote to admit golf was taken in 2009, perhaps mostly because the most famous athlete on the planet was a golfer – Tiger Woods – which meant a lot of money would come with him. The month after the vote he drove his car into a fire hydrant and his game, and his personal life, haven’t been the same since. There are those who argue that golf should not be in the Olympics because to win a gold medal can never be the high point of a career, compared to winning a major championship, which the Olympics should represent. Why not give a sport such as squash the place instead?

Essentially this was one of McIlroy’s points, but then Andy Murray & Co seem happy to go along with it even though tennis’ introduction in 1988 had been a shaky one, with several star names shunning Seoul. And there is also this. While Great Britain and the United States are mature golf markets, in many countries government funding is only granted if the sport is an Olympic one. This is the situation in many West European nations. You wouldn’t find many Italian golfers, for example, dissing the opportunities that the IOC’s decision has opened up for their sport. 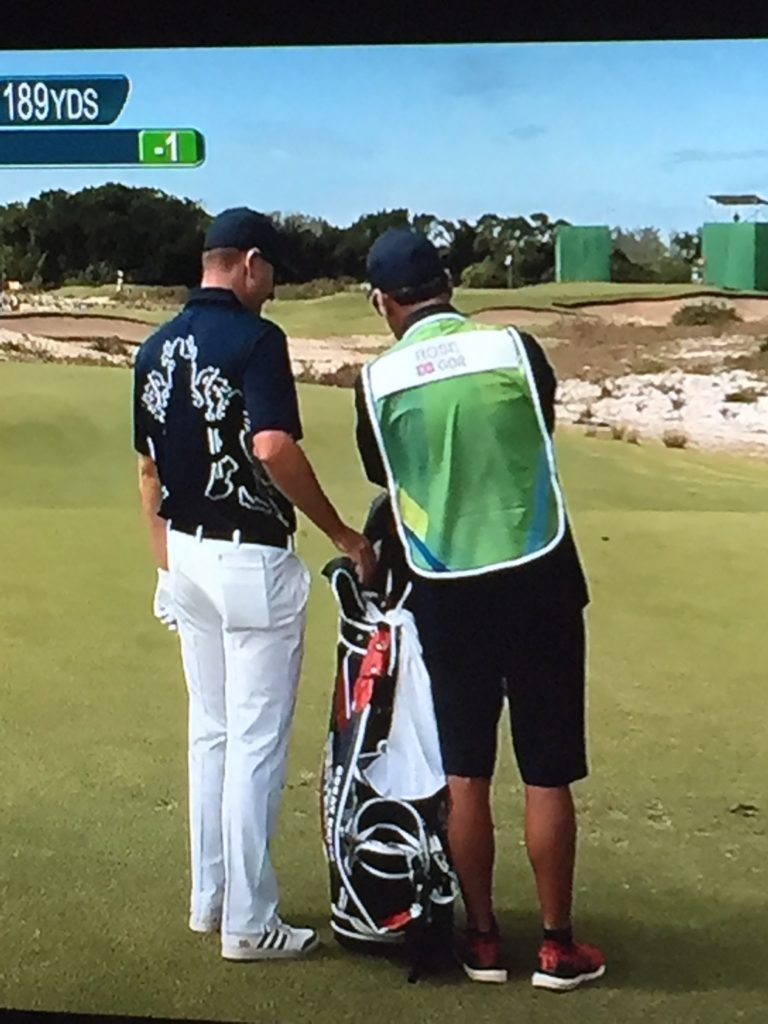 Rory McIlroy said he wouldn’t be watching the Olympics golf on TV, just the “proper sports” like athletics and swimming. His remark annoyed GB’s Justin Rose, and indeed had Rory been watching at around 4 o’clock on Thursday of the men’s event he would have seen Justin looking over the tee shot he’s about to hit here for a hole-in-one at the 4th. It came in handy as well. He won by two shots from Henrik Stenson

And, let’s face it, the field for the men’s event (which was played first) was hardly bereft of talent. It included Henrik Stenson, Bubba Watson, Rickie Fowler, Danny Willett, Sergio Garcia and Justin Rose. With the aforementioned half-dozen, they completed the list of the world’s top-12 golfers. And they featured prominently. Rose, the 2013 US Open champion, took gold for Team GB; Stenson, the reigning Open champion, collected silver for Sweden; the bronze went to Matt Kuchar of the USA. It was a good outcome for golf in the Games: a strong leaderboard, despite the no-shows, and the size of the galleries was impressive – unlike in some of the seated venues! – especially since Brazil is hardly a hotbed of golf. That might add impetus to its Olympic future.

“It felt like a cross between a golf tournament and a carnival,” said the delighted champion. “It was more like a Ryder Cup than a major but you can’t really compare it to anything else. It was incredible, unique.” Stenson agreed. “To call yourself an Olympian is something very special,” he said. “To be an Olympic medallist is even more special.”

One might have thought that women competitors with possible future baby plans would have been more alarmed about the infertility threats of zika than had been the men, but apparently not. Their event began on the Wednesday after Rose had blossomed on the Sunday and their leading players were happy to drive off rather than stay away in droves. Gold was won by South Korea’s Inbee Park, who strolled home by five shots after having again demonstrated in the final round why she’s the best putter in the women’s game. Lydia Ko of New Zealand took silver and Shanshan Feng of China the bronze. Special mention must be made of the last-round 62, nine under par and a course record, from Maria Verchenova of Russia. There were no drug-related controversies.

The course at Barra da Tijuca (see photo on the home page) was designed by Gil Hanse within the Marapendi Nature Reserve, about 15 miles from Rio’s famous Copacabana Beach. It has no trees, no rough, 79 bunkers and an unknown number of snakes in the neighbouring jungle. Despite this it will probably be an ideal ‘starter course’ for the local population from hereon. The six-time major champion Nick Faldo – who said “100% I would’ve been here playing…I think those guys who are missing will regret it and they can’t repair it next week” – was complimentary. “I’m a fan. Gil is all about creating angles for shots,” he told the Daily Mail, “and I like that aspect of his work that makes players think.” Well, perhaps best to think about that rather than the presence of caimans, which are like crocs, or capybara, the world’s largest rodents.

Assuming golf does remain part of the Olympic movement, one thing I think the officials should definitely do is make it a team event as well as an individual one. This year that would have meant Rose and Willett and Charley Hull and Catriona Matthew  – to take the British examples – would have had a combined score that represented the Great Britain team total. In other words, why not adopt a format like that of the original men’s World Cup of Golf? Something to ponder for the future, perhaps. As for the past, applications for golf-media accreditation in Rio were handled by a lady called Fanny Chase. Once she’s given up her career in admin at the International Golf Federation, I think a role as a Bond girl must beckon.