GOLF: The Open in Ireland

Last week the Open Championship, the 148th edition of it, was held in Northern Ireland for the first time since 1951. Indeed, this was only the second occasion the championship had been staged anywhere other than in Scotland or England. Of course, the chief reason why Royal Portrush had been omitted from the Open rota for so long was the political problems, the murders and the terrorism, that had been inflicted on the province for decades. Golf in Ireland has always been run-on non-partisan lines but there could be no ignoring all that.

And after that long wait, the crowds got an Irish champion. Shane Lowry became the second man from the Republic of Ireland to win the Open, Padraig Harrington having done so twice. Three men from the north have won the championship – Fred Daly, Darren Clarke (who hit the opening tee shot on Thursday morning) and Rory McIlroy (of whom more at the end) – and not forgetting Graeme McDowell’s US Open triumph of 2010.

This was the second-best attended Open ever (237,750 people) and very likely the noisiest as the huge galleries defied the rain to acclaim the new champion. The 32-year-old Lowry set up his victory with a fabulous round of 63, eight under par, on Saturday. Speaking about the weight of Irish expectation on him that evening, he said: “Unlike the others [from Northern Ireland], I grew up four hours away so I thought I could come here under the radar. But I’m not under the radar now.”

Indeed he wasn’t; he was four shots clear of second-placed Tommy Fleetwood. And although Lowry began his final round with a bogey five, he was never caught and never looked likely to be, even if recent history suggested that might occur. Lowry had also held a four-shot lead with a round to play in the 2016 US Open at Oakmont. He shot 76 to lose by three. That wasn’t going to happen again,. “I started to feel comfortable after 14,” said Lowry. “I felt like I was going to do it, especially after 14 when I went five ahead with four to play.” A closing 72 got him home by six shots from Fleetwood. 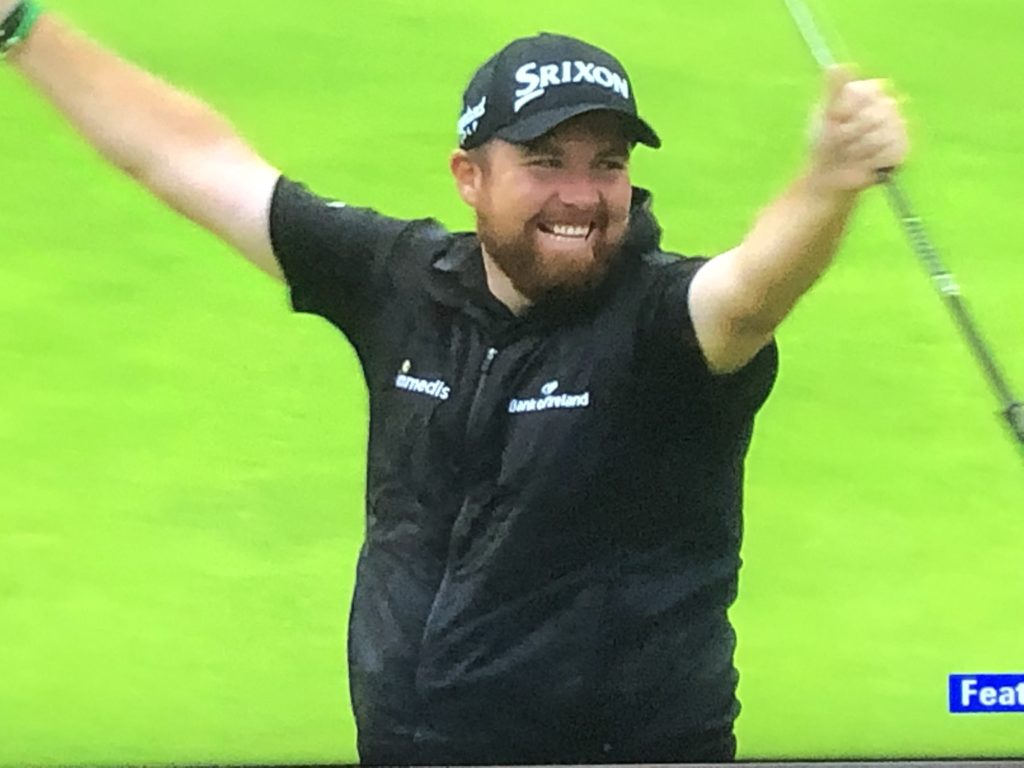 Shane Lowry in the moment after victory in the Open on Sunday (photo obviously courtesy Sky Sports!)

Inevitably, much had been made of McIlroy’s return to Northern Ireland, attempting to win his second Open and his fifth major, five years having elapsed since both those landmarks were reached. His father had bought him a round at Portrush as a tenth birthday present in 1999. Six years later, he set the course record of 61 while playing in the Northern Ireland Amateur Open. Ahead of the championship, he was philosophical. “This is a wonderful thing for this country,” he said. “To be quite a big part of it is an honour and a privilege [but] this is bigger than me.”

Just as well, really. He hit his first tee shot out-of-bounds (with an iron) and began with a quadruple-bogey. At the end of the day (he’s shown on the home page during his first round) he finished with a triple. It all added up to a 79, eight over par, this from a man who over the previous six Opens had a lower stroke average than anyone in the field. It wasn’t his week – despite a wonderful 65 on Friday which left him only one shot shy of making the cut – and it hasn’t been his year. Next season, perhaps? But for 2019, the champion golfer of the year proved to be a man of the south.