GOLF: The Open – Spieth finds his range after visiting the range

Only one man had won three major championships before his 24th birthday. And, no, it wasn’t Tiger Woods. It was Jack Nicklaus. Now Jordan Spieth has joined the club – in the nick of time. The Texan turns 24 on Thursday.

Going into the last round, he led this year’s Open Championship at Royal Birkdale (pictured on the home page) by three shots from a fellow-American, 39-year-old Matt Kuchar. No one else was closer than six away. Eight times Spieth had held the 54-hole lead in a tournament and he’d got the job sorted on Sunday in seven of those. The exception was the Danny Willett benefit on the 12th hole at Augusta last year. It felt bizarrely apposite at Birkdale that Willett was the first man out, alone, on Sunday morning. By Sunday evening, Spieth was the last man standing. Most people had expected that to be the outcome given the situation at the start. What nobody could have anticipated was the fashion in which Spieth won it.

He’s the best putter in the world, right? But on the first four holes he missed from 12 feet, ten feet, four feet and eight feet. That spelt three bogeys and his lead had gone. He later missed a tiddler for par on the 9th. Heading into the back nine, he was level with Kuchar on eight under par, he’d brought other players into the equation, and his game looked in bits. They had three pars apiece before arriving at the 13th tee where the story of this Open unravelled much like Jordan’s drive on that hole.

It missed the fairway so far to the right that it finished on the wrong side of a sand dune. He was probably 80 yards away from where he’d been aiming. After a discussion with the rules officials that lasted about 20 minutes, he took a penalty drop on the practice range. He had a shot of about 230 yards and went with his driving iron. He got it close to the green, hit a nifty chip to eight feet and downed the putt. Suddenly, that golden blade was back on song.

Spieth hit his tee shot to four feet at the 14th. Birdie. On the par-five 15th, he had a 50-footer for a three. Eagle. On the 16th, a 30-footer went down for another birdie. On the 17th, it was a 10-footer for birdie, which by then pretty much looked like a gimme. At 12 under par he led poor Kuchar, who had made two birdies of this own in this stretch and rapidly lost ground, by two. A par for Spieth at the last, where he shockingly failed to sink a 40-footer, and a bogey for his compatriot meant the final margin was three. “This is as much of high as I have enjoyed in my golfing life,” said the victor. “I’m going to enjoy it more than anything in the past.” 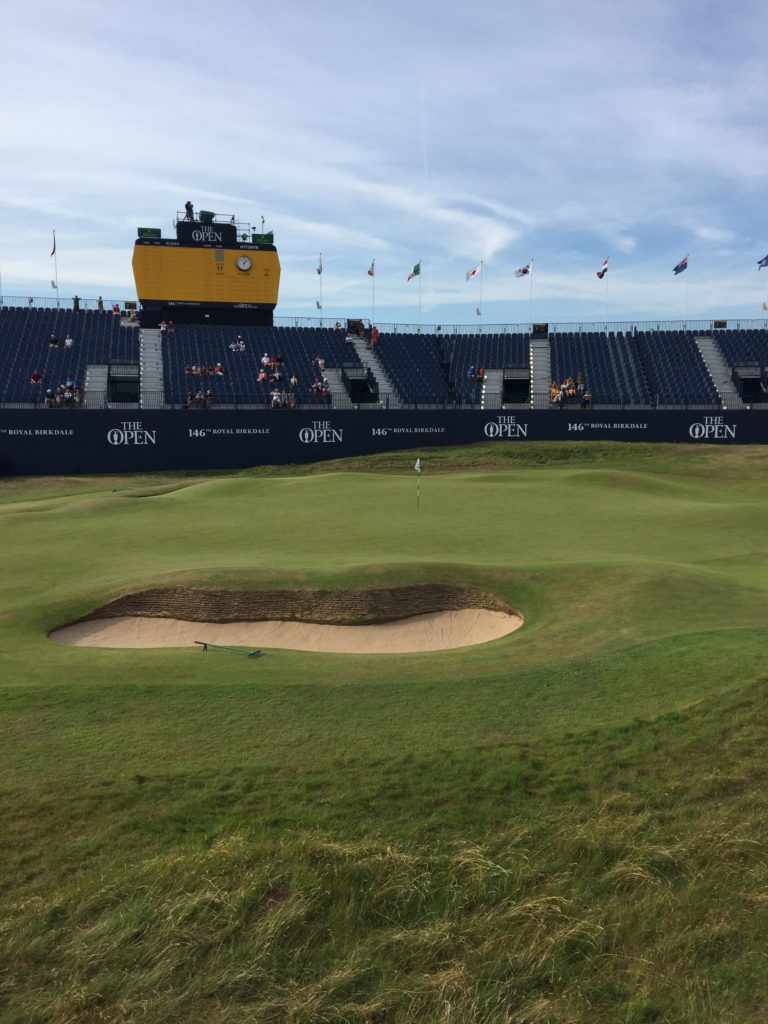 The 18th green at Royal Birkdale, pictured in calmer circumstances than Jordan Spieth saw it on Sunday

On Saturday, South Africa’s Branden Grace became the first player to shoot as low as 62 in a men’s major championship. (There had been 29 who have shot 63, Greg Norman and Vijay Singh having done it twice; on Sunday Haotong Li made that 30 and was rewarded with a third-place finish.) Grace’s eight-under-par round was bogey-free, his final birdie coming thanks to a marvellous iron shot that covered the flag on the 17th. I gather that on Sky TV, Nick Dougherty had commented when Grace required two birdies from the last four holes to break the record: “He’ll know about this alright. He might not know what the course record is here but he’ll know that.” I’d have been with Nick on that point, but I’d have been wrong as well. Grace didn’t know what he’d achieved until his caddie, Zack Rasego, told him after the final putt had gone down. They say a good caddie is one who knows when to speak. Perhaps just as well Rasego didn’t tell his man what was going on as they walked down the 18th fairway. “I don’t do interviews,” Rasego said afterwards, shunning the limelight. “Players do interviews.” Zack is clearly not out of the Steve Williams school of caddying.

The former world No. 1, Rory McIlroy, who had been five over par after six holes on Thursday, was only four shots behind Spieth and Kuchar when he had four holes to play; still in with a chance it seemed, albeit an outside one. But his drive on the 15th was so wild he couldn’t find his ball even with the assistance of half of Merseyside. He made six on that hole but an eagle at the 17th meant a birdie at the last, with Spieth on his walkabout at the practice ground, would tie the clubhouse lead. But his drive was a poor one and he couldn’t hole the bunker shot he needed. Given what Spieth was about to do, it didn’t really matter. The Irishman finished in a tie for fourth, seven strokes behind the champion.

McIlroy, who is 28, has won one more major than Spieth but none since Jordan started accumulating them, first at the 2015 Masters and then at the US Open a couple of months later. Two weeks on Thursday he will begin his attempt to win the career Grand Slam when he tees up at Quail Hollow in the USPGA Championship. Unless someone breaks his putter, you’d be mad to bet heavily against him.

56 thoughts on “GOLF: The Open – Spieth finds his range after visiting the range”