You will probably have seen the news and the sensational headlines a couple of weeks ago. Voters in Britain had been asked to go back to the polls in a second Referendum and this time they had come back with a startlingly contrasting verdict. Britain would remain in the European Union…

…sorry, the Honourable Company of Edinburgh Golfers would admit women members. Ten months ago, 64% of the membership had voted to allow women to join the club, which plays its golf over the glorious links (as shown in the photo on the home page) of Muirfield. That, however, wasn’t enough to attain the two-thirds majority required to alter its constitution. Last week, 80% said ‘Yes’. As a consequence, which was the reason that brought about the change of heart, the Royal & Ancient Golf Club of St Andrews has now said that Muirfield will again be eligible to host the Open Championship after being banished for just under a year.

One recent past Open champion, Rory McIlroy, was probably speaking for many people when he said: “I still think that it got to this stage is horrendous…I mean, in this day and age, where you’ve got women that are leaders of certain industries and women that are heads of state and not be able to join a golf club – I mean, it’s obscene.” Before we all get too excited, though, we do need to bear in mind that there will still be a process of membership application to be gone through for prospective women members and, no doubt, ‘facilities’ will need to be installed. But at least the club has made it into the 20th century now and perhaps the 21st sometime in the future. 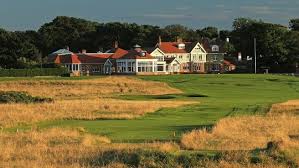 The finishing hole and the clubhouse at Muirfield

I heard a guy on the radio the other day talking about how the earliest Muirfield might get the Open back would be in 2022, on the basis that the venues have been announced through 2021. But that won’t happen. Indeed, it might be quite a bit longer.

The 2021 Open will be at St Andrews, the 150th anniversary of the championship. In 2022 it will surely go to an English venue, likely Lytham. In 2023, it will switch to the west coast of Scotland, which means that unless The Donald has mistakenly nuked North Berwick instead of North Korea, it would probably be at Turnberry. Figure on it being in England again in 2024, with Hoylake the most likely choice. In 2025 it would normally be scheduled to return to the east coast of Scotland, so Muirfield. But hold on! The R&A will perhaps be keen to return to the five-year Old Course rota and so St Andrews would hold it again. (This would have the added bonus for the Royal & Ancient of them putting one over their old rivals of the Honourable Company.)

BTW, I realise that “somewhere in England” does sound a bit woolly, but the R&A seem to have less options there than in Scotland, most of those being in what used to be called Lancashire. A terrific championship course could be created from the 36 holes at Saunton in Devon, and if someone could shift Bristol a bit further south that might be perfect, but I can’t see Barnstaple, Croyde and Ilfracombe coping with the accommodation demands.

We’ll see what happens. But 2034 for the HCOEG might work well for another reason. By then they may actually have women members at Muirfield, rather than them merely being eligible for membership.