GOLF: The Tale of the Trump – how the White House became the clubhouse

The US President-Elect Donald Trump has announced that he is going to remove himself from all his business interests in order to concentrate on what he needs to do the most: ‘Make America Great Again’. As his best British buddy, Nigel Farage, explained to Channel 4 News last month, outlining why the new incumbent of the White House would want a good relationship with the UK: “He’s got commitments with us. His mother was born here and he has got two golf courses in Scotland” – that is, Turnberry on the Ayrshire coast and Trump International near Aberdeen.

Nigel and his chief UKIP backer, Arron Banks, are keen golfers. So is The Donald. Very keen. Jack Nicklaus and Nick Faldo were among those quick to congratulate him on his success. When he convened top-level discussions to initiate the forming of his government shortly after his electoral triumph last month, the meetings were held at his Trump National Golf Club in Bedminster, New Jersey, 35 miles from Manhattan. Golf and Donald are close. In fact, ascloseasthis. He has a course in Ireland, too – at Doonbeg, which was designed by Greg Norman (before Trump was involved). Greg plays golf with Donald and apparently it was he who gave the Australian prime minister, Malcolm Turnbull, Trump’s phone number so that he managed to become only the second foreign head of state to speak to the new main man. While talking to John Key, Trump apparently asked the then New Zealand PM to pass on his regards to Bob Charles, now 80, the 1963 Open champion. No doubt Norman was speaking for Sir Bob as well when he told Newsweek: “I am glad we have another golfer in the White House.”

But then there is nearly always a golfer in the White House. Writing in The Guardian last month about the “first estate agent to become leader of the free world”, Will Buckley noted “the US electorate trust a man who can handle a 4-iron even more than one with whom they can have a beer”. Indeed: Eisenhower, Kennedy, Johnson, Nixon, Ford, Reagan, Clinton, Obama – and that’s only since World War II and by no means restricted to Republicans. In between interns, Bill should have been encouraging Hillary to take up the game. In fact, referencing a piece he wrote for The Observer in 2007, Buckley noted that back then he had asked Trump if he might ever be minded to run for President.

“People keep asking me to run,” came the reply.
“You’re a registered Democrat [strange but true]. Would you run against Hillary Clinton?”
“She’s a very good friend of mine. I can’t run against a friend.” 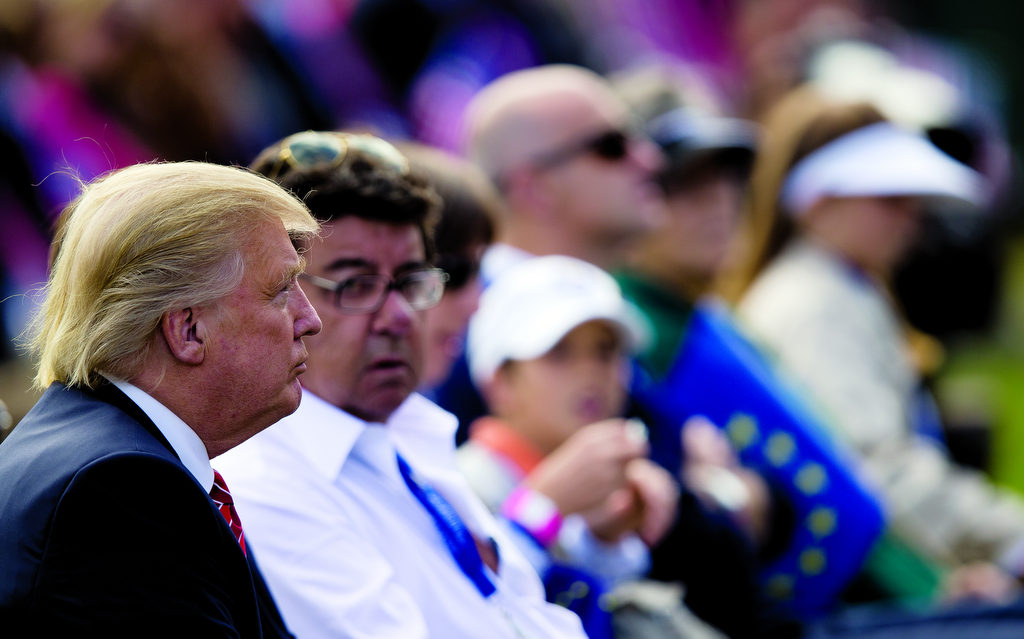 The Donald attending the 2012 Ryder Cup match in Chicago. Four years on and…who’d have thunk it?

Moving on…in the September 2014 issue of Golf World, Jock Howard recalled getting a phone call out of the blue from Trump which started with: “Is that the greatest golf journalist in the world?” He wanted to talk about Turnberry – which it later transpired he was on the verge of buying – and Howard was in charge of the magazine’s ranking of the top-100 golf courses in GB&I. Nothing like a dollop of flattery to begin a conversation. Of course, Trump would like that property to host the Open Championship for a fifth time and maybe it will get it quite soon. The next three Opens will be staged at Royal Birkdale, Carnoustie and Royal Portrush. It will almost certainly be in England in 2020, probably at Sandwich, because the 150th anniversary of the championship in 2021 will surely be held at St Andrews. It’s likely to be at Lytham in 2022, but Turnberry would seem to be in line for 2023, after a 14-year hiatus. If Trump is a one-term president he’d be out of office by then but the announcement about it would be during his presidency.

Not all may be running smoothly on the golf front, however. The Times recently said that Trump’s two Scottish courses lost £9.5 million last year; a pretty much concurrent piece in Private Eye suggested their financials might as well have been plucked from thin air. The Times also pointed out that Trump had promised the Aberdeen project would create 2,000 jobs as opposed to the 95 it has to date, while the Eye questioned whether his plans to invest £700 million in the two Scottish ventures might prove to be “truthful hyperbole”? Are they suggesting you can’t always believe what the man says? Be careful: The Donald evidently has his own emoji 😡 which reflects his view of those who try to cross him.

In another 2014 interview, this time with John Barton in Golf Digest, Trump talked himself up a lot (what a shocker!) and noted that “I’m an honest person; I’m a very honest person” even though the writer was not convinced. To cite just one example, The Donald told Barton about Trump International. “The course is full, by the way. It’s doing record business. Rave reviews. I can’t get friends of mine on the course.” Barton later checked and found he could get a tee-time pretty much any time he wanted. So The Donald does dissembling? Again, what a shocker!

Be that as it may, in this post-truth/pro-Trump era, there’s this. In September Liam Fox, the man (notionally) responsible for sorting out the UK’s trading position with the world after Brexit, complained that British businessmen had got “too lazy and too fat” to get out and about exporting goods “because it might be too difficult or too time-consuming or because [it would mean] they can’t play golf on a Friday afternoon”. Since the events of November 8, how off-message does Noxy Foxy sound now?

71 thoughts on “GOLF: The Tale of the Trump – how the White House became the clubhouse”