Jeans generation golf? Bring it on! Actually, some people already have. Last month, Clickon Golf staged an event for Millennials (or Generation Ys), be they devotees, neophytes or somewhere in between when it comes to golf. These are young adults who tend to be time-poor but socially rich. The evening didn’t just involve golf but also interactive entertainment, music and alcohol. What’s not to like? The 120 attendees for the inaugural bash in Notting Hill wanted, in the words of George Mackenzie – editor of the website click.co – “a sport that slotted into their social lives, not the other way around”. With golf-themed games such as “Chippin’ Hell”, the participants found a kind of heaven.

At one point, the enthusiastic young woman explaining the company’s philosophy said: “After all, golf does not have to be played on a golf course.” For about five seconds I’m thinking how to respond to this and then I realise she’s right. Golf was played as colf in the Low Countries several centuries ago, where the ‘course’ was the countryside and the target might be a barn door. The probable evolution of the sport is that the Scots codified the game and introduced the hole as the specific target, but essentially the idea of ‘golf’ or something like it has been played since whomever the first shepherd was to use his crook to strike a stone. Furthermore, no golf course is the same – it’s not a defined area, like a tennis court – and it is played on several distinctly different types of grass. So why not in a warehouse? It may not be golf as most of us know it but it’s still enjoyable. 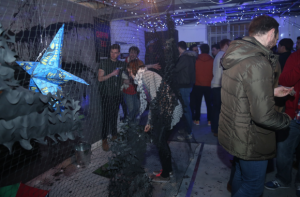 As in the real thing, you mostly do get to hole out, which provides the usual satisfaction. Maybe the main element that’s missing compared to ‘real golf’  is the one that means which however horribly you might generally have played, there’s invariably the memory of that one shot, that one moment, which makes you  want to come back for more; the bizarre certainty that your ‘real’ game is the round that’s five shots below your handicap rather than the more normal ten shots above it; that since you hit a perfect 5-iron yesterday, there’s no reason why you won’t tomorrow.

Having made this point, Clickon Golf are on the case here, too. They have already held a Street Shot competition and have plans for more. The initial version had two teams of two players who hit golf balls from scaffolding into oil drums (no oil); tried to knock flying drones out of the sky with a golf ball (seemingly impossible); and attempted to hit balls into a rowing boat while it was being rowed by their opponents with the intention of repelling all incoming missiles. It looked tremendous fun.

I think you should visit these guys’ website (clickon.co). If you love golf, whatever your age, you’ll like it. Their next major event will probably be in London in April and for what it’s worth, if you’re around 30 or under, I think you should go if you can. Oh, but ideally, no polo shirts; no beige. (What was that about dress codes?)