Dustin Johnson claimed his second major championship in emphatic style by winning the Masters on Sunday, five shots clear of Australia’s Cameron Smith and South Korea’s Im Sung-jae. A closing round of 68, four under par, enabled him to establish a new tournament record of 268, beating by two shots the totals set by Tiger Woods in 1997 and Jordan Spieth in 2015. In part that was likely down to the conditions. This was the first-ever autumn Masters, and a play-delaying deluge on Thursday morning which followed days of stormy weather meant Augusta National was never able to play as firm as the club would have liked or as it usually does in April. Spare a thought for runner-up Smith, though – he became the first player to break 70 on all four days at Augusta, and he didn’t win!

Johnson, who is 36, came into the Masters ranked the world No. 1. His last six starts had produced finishes of 2-1-2-3-6-2. His last four finishes at Augusta had been 6-4-10-2. (He withdrew in 2017 after he fell down some stairs on the day before the tournament began.) On the other hand, while he held a four-shot lead on Sunday morning, he was 0-4 in terms of converting 54-hole leads in major championships into 72-hole victories. When he won at the 2016 US Open, the Saturday night leader had been the current Open champion, Shane Lowry.

The only time Johnson’s triumph seemed in doubt was after he bogeyed the 4th and 5th, his four-shot advantage reduced to one. He responded by hitting his tee shot at the 6th to within 10 feet of the stick and the putt was never going anywhere but straight in. 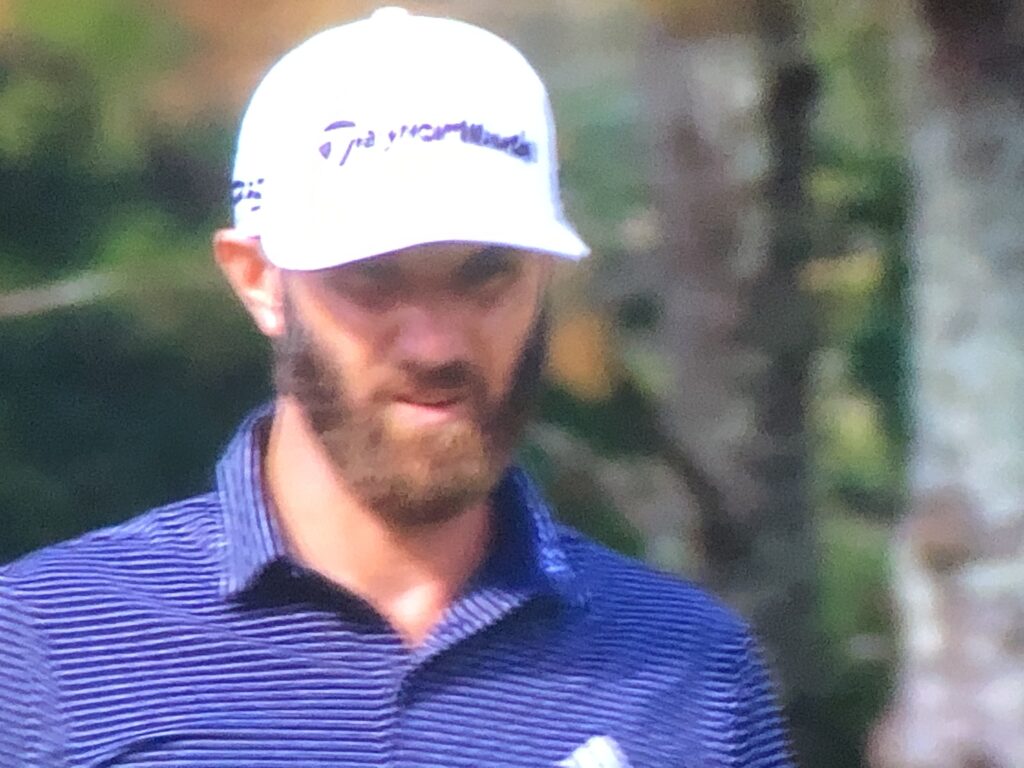 “The Masters to me is the biggest tournament and the one I wanted to win the most,” Johnson said afterwards. He was born 75 miles away in Columbia, South Carolina, so while not strictly a home-town champion as Larry Mize had been in 1987, he was pretty close. “I was nervous all day. I’m very proud of the way I handled myself and finished off the golf tournament. This is a dream come true.” It has to be said that he didn’t look like he was a bundle of nerves on Sunday.

OK, back to my Masters preview last week, which was essentially about three players. Much pre-tournament fun was had by those wielding stats like the fact that Tiger Woods was aiming to match Jack Nicklaus’s haul of six green jackets by going into the Masters ranked the 33rd best golfer in the world, just as Jack had been in 1986. Woods opened with a four-under-par 68 and looked in good shape, but it never got much better. He got it to six under on a couple of occasions but never looked likely to claim his 16th major championship. This was especially so after he triple-dipped into Rae’s Creek and ran up a 10 at the 12th on Sunday. I’m sure you’ve seen it. X-rated stuff indeed. However, apparently undaunted, and certainly never a quitter, Tiger birdied five of the last six holes. In fact, he covered the last three in two fewer shots than he’d taken on that one par-three. Remarkable.

Rory McIlroy opened with a 75. Even if he’d had Tiger’s Thursday 68 he would not have been able to catch Johnson (assuming everything else stayed the same) but by way of an example of his mercurial golf let me point out that in the third round he was four under for the day, seven under in total, as he stepped on to the 12th tee. From there he played the two par-threes in a cumulative four shots and the two par-fives in 11. It is extraordinary but true that since he won his last major, the 2014 USPGA Championship, McIlroy has been a cumulative 28 over par for his first rounds in majors and 64 under for what he’s done once Thursday is out of the way.

Before the off, the suggestion was that Bryson DeChambeau would pummel Augusta with a display of power even more awesome than he had produced in winning the US Open in September. He rather dug himself into a hole by saying he felt the par-72 layout was a par-67 for him given he could easily reach all four par-fives in two and could drive the 350-yard 3rd hole. But the course got its retaliation in early. Beginning on the 10th hole on Thursday, DeChambeau played the par-five 13th in two over par rather than the two under that some had suggested was pretty much a formality. On Friday, he again tried to drive the green on the 3rd hole. He hooked the shot and unbelievably – this is Augusta National! – he lost it in the rough. (Must have been the same place where some Republicans are alleging Georgia has dumped all those votes for Trump.) He made the cut on the mark and left the premises on Sunday having finished in a tie for 34th.

I suspect we have far from heard the last of him but it might encourage a touch of humility when he reflects that his final score of 286 was one shot higher than that of his final-round playing partner, Bernhard Langer, the champion in 1985 and 1993. Bryson is 27. Bernhard is 63. I’m sure they are both already looking forward to the Masters returning to April next year, when those parasols (as shown on the home page) can be unfurled for the patrons’ pleasure.